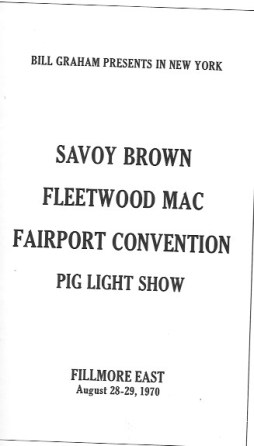 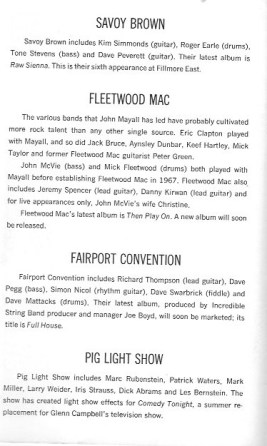 TICKETS TORN IN HALF: August 29,1970: SAVOY BROWN/ FLEETWOOD MAC/ FAIRPORT CONVENTION@FILLMORE EAST. Back to my home setting Fillmore East for what would be one of my favorite shows of the summer of 70. This one featured Savoy Brown, Fleetwood Mac, and Fairport Convention all British acts sharing the bill. Fairport had Sandy Denny and Richard Thompson, Fleetwood Mac was missing Peter Green which was a huge disappointment but this newer FLEETWOOD MAC now had Christine Perfect  on board full time and they did some KILN HOUSE stuff which rocked. Savoy Brown was Kim Simmonds but had no Chris Youlden on vocals. Lonesome Dave did the voice, and shades of FOGHAT were born.