TICKETS TORN IN HALF

TICKETS TORN IN HALF July 14, 1974 ALLMAN BROTHERS BAND@ Nassau COLISEUM- In my opinion not really a good time musically for the ABB but they are a huge draw and the crowd goes nuts with each tune. It will be awhile before I see them again, if I ever do.(But I do).

TICKETS TORN IN HALF July 14, 1984: SIOUXSIE & THE BANSHEES @ Beacon “Hyaena Tour”. This really was a trip as I did not know what to expect and was amazed at how good they were. Opened with DAZZLE, played CHRISTINE, ARABIAN KNIGHTS and encored with HELTER SKELTER.

TICKETS TORN IN HALF July 14, 2005:LUCINDA WILLIAMS @ Beacon. w/ ELVIS COSTELLO I gave my friend a copy of “Car Wheels On A Gravel Road” and he was hooked. “We”, he said, needed to see LUCINDA WILLIAMS, so here we are in the BEACON, loge of course, very near to my ABB seats.

She opens with “Ventura” and slowly has the band come out to join her…and later ELVIS COSTELLO joins the festivities.

FRUITS OF MY LABOR

CAR WHEELS ON A GRAVEL ROAD

Bucket list bands are sometimes the best to see, especially after waiting for years to get the chance. Once in the rare opportunity you could be disappointed. Tonight was NOT one of those disappointing shows by any stretch of the imagination.DWIGHT YOUKUM on the bill of the “LSD TOUR- It’s Worth The Trip” featuring STEVE EARLE and THE DUKES and LUCINDA WILLIAMS, how could we go wrong?  BRAVO to whom ever thought of putting this show together and at a reasonable price.For me DWIGHT was the attraction as I saw STEVE EARLE last time through town (with Los Lobos) and LUCINDA not that long ago.

BIG LEG, a Dwight Yoakam protege,opened the evening to a receptive crowd. STEVE EARLE and THE DUKES (with a DUTCHESS) are next. The guitarist (playing a DanElectro) and the fiddle player in the band are the hubby/wife duo known as THE MASTERSONS, an alt-country group based out of all places BROOKLYN, NY. Check ‘em out, they are amazing playing and singing with STEVE.

Clear the stage and get ready for LUCINDA WILLIAMS. First off, her guitarist has about a dozen or so classic guitars on the rack and a stomp box board about an acre in size, some of which he uses to make incredible sounds. ‘Drunken Angel”, “Lake Charles”,”Bitter Memory”, “Changed The Locks” (which she dedicated to her friend TOM PETTY who covered the song),”Honey Bee” and “Foolishness” were stand outs this evening. Nice applause and the lights come up immediately, no encore as was with STEVE.

A VOX amp was given the road crew fits as they attempted to set up for DWIGHT YOAKAM. Finally, ready to go with the risers, amps, drums, all placed far back allowing a huge expanse of open stage, the house lights dim and flashes of white lights appear, each accenting the rhinestones on the musicians jackets as they sprint across the stage to take their spots. A CHUCK BERRY riff is heard off stage, “Little Queenie”, and as the spotlight hits the side of the stage, enters DWIGHT YOAKAM, the star for this evening and the guy playing that riff. The band kicks in, the lights flash across the huge stage, LAS VEGAS style is in the house tonight. True professionalism, no idle chatter, no tune ups required, change of Dwight’s electric to acoustic guitar occurred while the band completed a tune, and he dances and shuffles across the stage to the delight of dare I say, the large contingent of women in the audience. And the Vox amp crapped out in the second song to which Dwight directed the attention to by putting his boot on it and shaking his head to the crew still not missing a beat or a shimmy. Quickly the amp was by-passed to another and the show continued on for over an hour.”Little Sister”, “Streets of Bakersfield”, a few MERLE HAGGARD tunes thrown in as a nice tribute,a cover of  WARREN ZEVON’S amazing “Carmelita”, “ the obligatory (for me anyway) “Honky Tonk Man”, “Guitars and Cadillacs” and the closer with STEVE EARLE and LUCINDA WILLIAMS on back up vocals “Dim Lights, Thick Smoke (and Loud, Loud Music).Song over, lights up, time to exit. Bucket list item done, add DWIGHT YOAKAM to the roster of shows. 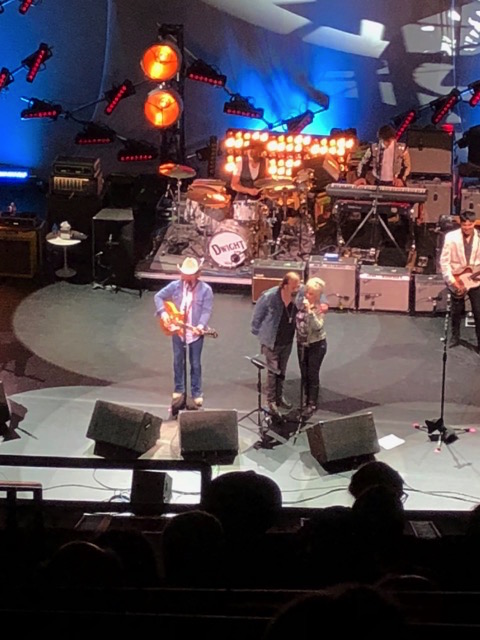