Jethro Tull and Haystacks Balboa at Central Park was another one of those bills were the head act brings along a lesser known label mate to open the show. This lesser known act included Leslie West’s brother on guitar (HB) and they stunk. Then, Jethro Tull was introducing some new songs, one being MY GOD. Overall, Tull was musically good but lyrically not my cup of tea any longer and most of the crowd was unfamiliar with the new stuff. Musically, it was a tough night. However, TULL was destined for bigger things and real soon. And I got a MY GOD bootleg outside the venue, for free. But, that’s another story altogether. 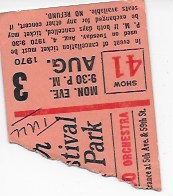